Behold, the Dragon of Editing has come upon me once more with fiery breath and mighty talons! My agent has gotten back to me on the new project (see previous post) and…gah too many loose ends! The book’s setting holds great promise and the bones of…something…are there but No, I threw too many plates in the air.

The book has basically six points of view. Five main characters living in the present and one living in the 1850’s. My agent pointed out that he didn’t know who exactly to root for and…he was right, damn it. The problem is with so many points of view I was already looking ahead to the next chapter, worried about keeping the plot(s) flowing, and I never really had enough space to develop each character fully. To do this the book would need to be more like 900 pages (instead of 400) and yeah, fuck that! Plus, the plot really doesn’t need 900 pages anyway…which could be said of every plot devised by basically every writer other than Tolstoy whoever wrote a book that long.

So what do I do now, you ask? After rewriting a 420 page novel from scratch and coming up with a fresh 380 page version? Do I claw my eyes out and scream the silent scream of the damned? Mmm, tempting…but no.

I’m going to rewrite the rewrite! I’m going to focus on one character from the earlier novels, shift from a general adult audience to horror YA, and come up with a plot pared down to the bone and as mean as Dick Cheney in a tickle fight. On my side, beside my own craziness, is the fact that after 230,000 words of effort I’ve truly developed a world (a town called Hawthorn) and I have a slew of material to draw on (I’ve retitled the file for the rewritten novel, the one my agent read, as simply FODDER and plan to pull entire chapters from it and punch them up to my new purpose-though this could be even more work than writing everything from scratch).

So here I go again, rewriting the rewrite. You either ride the Dragon of Editing or it eats you for a light snack… 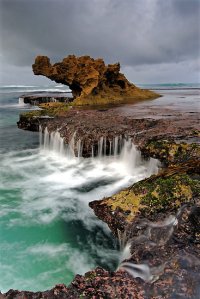 Postscript: This 3rd time around I’ve already created an entire plot outline and read it to my agent line by line over the phone, just to make sure we were on the same page. I figure if I’m crossing over a thousand from-scratch pages on this baby it doesn’t hurt to be certain.