I recently adapted my novel The Firebug of Balrog County into a screenplay in hopes of getting it turned into a movie one day.  The producer who bought the film rights to The Town Built on Sorrow was kind enough to say yes when I asked him if he’d read a screenplay if I wrote one, so here we are-FIREBUG is now in splashy feature film format.

My readers have said my fiction is very cinematic as far back as twenty years ago when I was a dewy-eyed freshman at St. Olaf College.  I always assumed this was a good thing, since it meant readers could easily visualize the scenes I wrote, which meant I was at least doing a serviceable job of description, but I also wondered if this could be taken as a bad thing as well-maybe cinematic meant I’d never be a great literary writer, maybe I was just doing splashy hack work, painting with bright colors while leaving the heavy lifting behind.

But now, seventeen novels in, I find that I don’t give a shit one way or another-my writing is now simply my writing, my voice is my voice.  That’s one of best things about getting older, I’m finding. There’s just so much you don’t give a shit about that once you would have let bother you, or allowed to put you off from trying something new. As the years add on, you become more YOU than ever, and hopefully you’ve cultivated your own internal and external life enough you’re able to live with, and even enjoy, your developed self.

It’s a strange experience, to say the least, adapting your own novel (which itself adapted many things from your own life) into a screenplay.  You suddenly look at the 300 pages you wrote several years ago and find yourself mining it for only the most crucial scenes, the snappiest dialogue. All those beautiful descriptions and churning internal passages now most be crystallized into what can be seen and absorbed on-screen.  There’s no more deluding yourself:  THIS is what your readers came to the dance for, THESE are the juicy bits of your story. Sure, that’s a fun scene, but is it good enough, and necessary enough, that it should cause an entire crew of people to film it?

On one hand, the formatting of a screenplay feels liberating compared to the textual density of fiction. So much blank space! So much crispy dialogue! How amazing! You can write fifteen pages in a day without wanting to gouge your eyes out! How easy it is to imagine the masses viewing your work on the big screen! On the little screen, too, maybe in an airplane soaring 10,000 feet above the earth!

But it also feels kind of dumb. Or dumbed down, more accurately. You need to write a screenplay so it can be easily accessed by a multitude of readers for a variety of purposes.  For practical, creative purposes, like sound design and cinematography.  So actors can repeat the sentences you’ve written and deliver them as if they’ve come up with them themselves. So a producer you’ve never met understands what you’re going for and can visualize it all working on the screen and being sold to the public. You need to be broad, basic, and to the point.

I enjoyed adapting my book into a screenplay, and I think the screenplay turned out well, but by the time I was ready to send it off I was also ready to go back to the dense embrace of fiction.  Candy is tasty, and can deliver a hell of a sugar rush, but, at least in my specific case, I need to eat wild rice and broccoli, too, lest I turn into the mental equivalent of Eric Cartman. 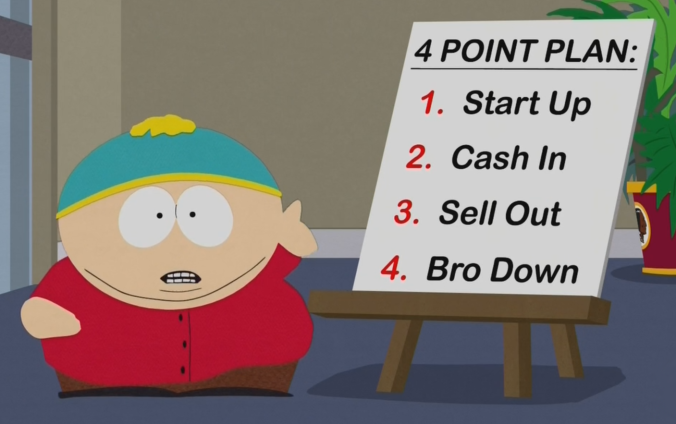